Dozens of Abyan coast-goers in the city of Aden, southern Yemen, were stunned on Tuesday in front of an unusual event that occurred on the beach.

Eyewitnesses in the city confirmed that thousands of dead fish spread along the coast of Abyan in a strange and dense manner, without knowing the reasons behind the disaster. 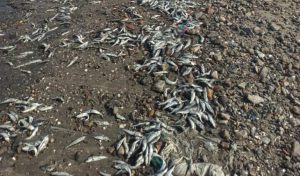 It is likely that the fish have been subjected to genocide due to throwing residues and toxic chemicals into the sea by the ships of the Saudi-led coalition, which affected marine life.

Activists attributed the repeated death of fish and marine creatures on the coasts of the Yemeni southern provinces to the systematic hostile actions of the coalition to target the fish wealth and the marine environment in Yemen.