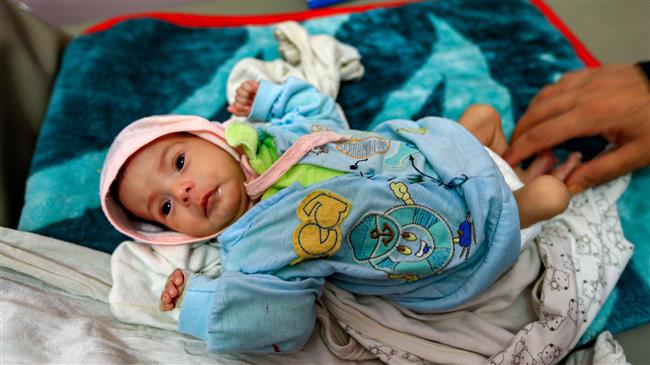 Yemeni officials say the years-long Saudi-led war and blockade against the impoverished Arab country has increased infant mortality to extremely alarming proportions due to famine and disease.

The Ansarullah made the claim on Thursday, saying the ongoing Saudi military aggression against Yemen has fueled famine, disease and poverty, resulting in the deaths of 50,000 children annually, many of whom are under a month old.

Saudi Arabia and its allies launched a deadly military aggression against Yemen in an attempt to reinstall a Riyadh-backed former regime and eliminate the Houthi movement, which has been defending the country along with the armed forces.

The Western-backed offensive, coupled with a naval blockade, has destroyed the country’s infrastructure.

It has also led to the world’s worst humanitarian crisis in Yemen, with many children suffering from cholera and severe malnutrition.

Children are among the most vulnerable victims of Saudi imposed war on Yemen. The issue has barely drawn any international response despite numerous reports about child deaths.

Back in February last year, United Nations Secretary-General Antonio Guterres said tens of thousands of children under the age of five have died of starvation in Yemen ever since Saudi Arabia and a number of its allies launched an atrocious military aggression against the impoverished country.

Also in November, Yemeni Minister of Public Health and Population Taha al-Mutawakel, announced that every 10 minutes, a child under the age of five died from extreme hunger in the war-ravaged country.

Separately on Thursday, the spokesperson for the Ministry of Health in Sanaa, Saif al-Hadri, criticized the inaction of international community on Yemen’s crisis, saying none of the leading global powers has taken any serious initiative to force Saudi Arabia to lift its economic siege and work towards bringing the war to its end.

He described the situation of Yemen’s children as “disastrous in the shadow of war”, pointing out that “approximately five and a half million children under the age of five are suffering from malnutrition”.

He went on to say “one child dies every ten minutes in Yemen”, adding that “80 percent of children in Yemen live in a state of stunting and anemia due to malnutrition.”

“Two hundred thousand women of childbearing age or some of them are pregnant or have given birth to malnourished children, which threatens the lives of children,” he added.

The Saudi aggression has displaced millions and left 24.1 million — more than two-thirds of the Yemeni population — in need of humanitarian assistance, including more than 12 million children.

The US-based Armed Conflict Location and Event Data Project (ACLED), a nonprofit conflict-research organization, estimates that the war has claimed more than 91,000 lives over the past four and a half years.

1000s in need of food, shelter as fighting intensifies in Yemen

Meanwhile, the International Committee of the Red Cross (ICRC) says it is deeply concerned about the continued impact of fighting between Houthi fighters from Ansarullah movement and Saudi-led mercenaries in northern Yemen.

The intense fighting has displaced tens of thousands of people, forcing them to move to Yemen’s northern city of Ma’rib and this has left them without food, shelter and access to medical care.

The ICRC and the Yemen Red Crescent Society have helped around 70,000 people, or 10,000 families, by providing food, tents, blankets, jerrycans, basins and hygiene kits.

Additionally, the ICRC has provided surgical material and medicine to Ma’rib Commission Hospital and body bags to The Yemen Red Crescent Society to facilitate the dignified treatment of the dead in support of health facilities.

“I’ve met people from all over the country who fled to Marib. Some have been here for days, others for weeks, months or years. The lucky ones have joined family and friends while others have been forced to leave everything behind,” said Mariateresa Cacciapouti, head of the ICRC’s sub-delegation working in Ma’rib.

“Time and again Yemenis are being forced to flee, leaving behind loved ones, losing their homes, keeping only their hope”.

Tens of thousands of people, most of them civilians, have been killed in Saudi airstrikes and ground operations in Yemen over the past five years.

The Houthi have responded by mostly targeting military positions deep inside Saudi Arabia or sites inside Yemen where Saudis have deployed mercenaries and military forces.

The Saudi-led coalition has been widely criticized for the high civilian death toll from its bombing campaign. The alliance has carried out nearly 20,500 air raids in Yemen, according to data collected by the Yemen Data Project.

US military spy plane shot down in Mahra