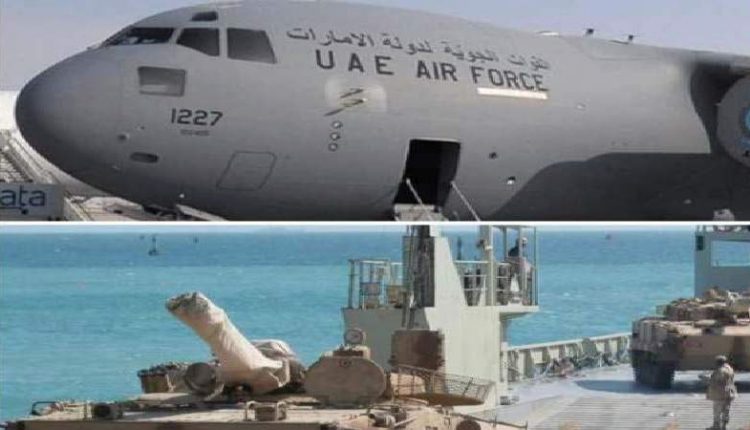 The UAE state, which is implicated in the aggression against Yemen, began preparations for the establishment of a new military camp for its invading forces on the island of Socotra, in conjunction with a campaign to displace the island’s residents.

Local sources indicated that dozens of Emirati officers and a number of Israeli engineers began planning to create a new camp in Hadibo, the administrative center of the island.
The sources added that the creation of the new camp comes with the purpose of absorbing the new military batches of the forces of the coalition of aggression that have flowed to the island during the recent period.

The sources indicated that the camp will be equipped with modern surveillance and intelligence equipment. An Emirati-Israeli military ship arrived at the port of Socotra, carrying military equipment.

Emirati regime continues its aggressive efforts to militarize and occupy the island, as part of a plan to isolate it from the rest of the Yemeni governorates, in conjunction with its continued forcible displacement of the local population on the island.

The Ministry of Fisheries condemned Friday the acts of forced displacement of the residents of Abd al-Kuri Island by the US-Saudi-Emirati aggression, expelling them from their homes and displacing them to other places.
Considering the island as one of the most important islands of the Socotra archipelago, it demanded the exit of the forces of the aggression coalition, from all Yemeni lands, islands and coasts, and not to displace citizens from their homes, according to Saba news agency.

The ministry blamed the Security Council, the United Nations, and its human rights organizations for its silence regarding the forced displacement of the people of Abdul-Kuri Island, calling on the free people of the world to take serious action and stand up against the heinous crimes that the people of Yemen are subjected to.

The Ministry of Fisheries called on UNESCO and environmental protection organizations to carry out their duty regarding the looting of the Socotra archipelago and the destruction of its natural and marine environment and the unique vegetation cover that characterizes the archipelago as it is listed on the World Heritage List.

It stressed the right to pursue and prosecute the countries of the US-Saudi aggression for the crimes and violations they committed, which will not be subject to a statute of limitations.

The United Arab Emirates (UAE) continues its displacement operations from the Socotra archipelago, the far south of Yemen.

Local sources confirmed on Tuesday that, during the past hours, Emirati forces expelled dozens of families from their homes on Abd al-Kuri Island, at gunpoint.
The sources pointed out that the new displacement comes after the start of construction work to build military runways and warehouses belonging to the joint Emirati and Israeli forces stationed in the archipelago.

The Euro-Mediterranean Human Rights Monitor had accused the UAE forces and their factions of expelling dozens of families from their homes in the Socotra archipelago, at the beginning of this year. The evacuation of residents on the island of Abd al-Kuri coincides with the establishment of an Emirati-Israeli military base on the island, with the aim of strengthening control over maritime navigation routes in the Indian Ocean and the Arabian Sea.