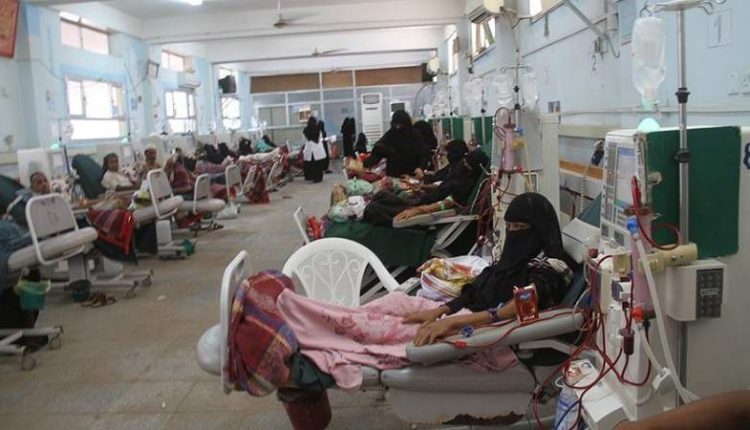 Officials in the health sector warned Sunday that hospital services would be completely halted for patients in the event of electricity cuts due to the lack of fuel caused by the US-Saudi blockade on our country.

Vice President of the Gomhori Hospital Authority, Dr. Naji Al-Hubaishi, confirmed to Almasirah that the imposed siege by the US-Saudi aggression greatly affected the health sector, and it is a direct aggression targeting the lives of Yemenis.
Dr. Al-Hubaishi explained that the health services provided in all hospitals and medical centers depend on electricity and if it stops, life will stop, which is a death sentence for patients by the countries of aggression against Yemen.
He noted that we do not have any fuel reserves sufficient for critical conditions, appealing to the international community to stand by us to save millions of patients in all governorates.
For her part, the head of the dialysis center at the Gomhori Hospital, Dr. Huda Al-Hibri, stated that the center provides services to 110 patients per day, and most patients do not reach us due to the lack of fuel derivatives.
Dr. Al-Hibri confirmed that the dialysis machines may stop at any moment if there is a power outage. She appealed to everyone to look with mercy and compassion before the disaster occurs.
In turn, the head of the National Cancer Center, Dr. Abdullah Thawabeh, stated that the Oncology Center provides its services to more than 25,000 patients in all Yemeni governorates.
Dr. Thawabeh said: “over 120 patients receive treatment daily in the radiation department, and in the chemotherapy department, 140 patients and others in the diagnostic and examination departments, and all of this depends on electricity.”
He added, “We can hardly cover treatments and services for oncology patients, and our available stock is not enough for a month, so what if the blockade on oil derivatives continues.”
Dr. Thawabeh pointed out that the Oncology Center is completely dependent on electricity, and we fear that it will stop at any moment due to the blockade on oil derivatives.
He explained that there are doctors who were unable to reach the oncology center due to the lack of fuel derivatives, as well as patients in the governorates who will lose their lives at any moment if they do not arrive on time.
He warned of a humanitarian catastrophe against cancer patients, holding the countries of US-Saudi aggression and their mercenaries responsible because of their unjust siege imposed on the country.
The Yemen Petroleum Company confirmed that the US-Saudi aggression continues to detain six fuel tankers carrying 144,667 tons of fuel for nearly five months.
In a statement, the company stated that the forces of aggression seized 6 fuel tankers, including one carrying domestic gas, and five other tankers carrying (135,179) tons of diesel and mazut.
It indicated that the detention period of these tankers amounted to “143” days, despite the fact that all of these tankers completed all examination and audit procedures through the mechanism of the Djibouti Verification and Inspection Mission (UNVIM) and obtained UN permits.
The company’s statement noted that “the continuation of criminal piracy and its various catastrophic repercussions has not been matched by any serious and tangible move by the United Nations, as it is the international body concerned with facilitating the entry of imports of basic goods.”
On Thursday, the Yemen Petroleum company confirmed that the US-Saudi aggression continues to piracy operations of fuel derivatives tankers.
Share FacebookTwitterGoogle+ReddItWhatsAppPinterestEmail