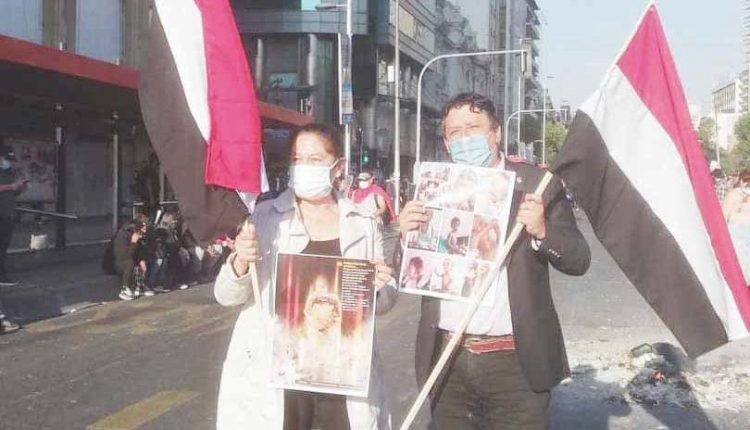 As the Chilean capital Santiago witnessed, on November 12, 2020, a massive demonstration in front of the American embassy to protest the massacres committed by the Saudi-Emirati-American coalition in Yemen.

After nearly six years of the start of military operations and a comprehensive blockade, this means the influence of popular diplomacy is spreading and expanding on the map of the world, which means  That the legal profession, in its original essence, is not framed by ideology, doctrines, interests, or geography, nor will the fallacies of deceptive media platforms be able to obscure the facts from them, and if that appears temporarily, it depends on the factor of time that ensures its transformations change convictions in favor of the truth.

In this corner, we quickly present one of the truest echoes of the Yemeni grievance that has unfolded with the path of war and siege to reach all the world’s free activists, jurists and activists, and it is the story of the Chilean human rights activist “Connie de Witt” who led the aforementioned protest demonstration with the participation of  Many of the liberals in that faraway country (Chile) in Latin America, uploading pictures of civilians, children, adults and omen who were killed by direct bombing of the coalition warplanes, demanding an end to the war, ending the siege, and trying the coalition parties as war criminals … to the details:

The mental picture was dark, as the American and Israeli Western alliance machine plotted it about the purposes of the war on Yemen through their Saudi and Emirati tools, and from an early time preceded the war, siege and military operations on the ground and in all languages, and all of it is that lightning military operations led by an Arab country which has the largest reserve  Oil in the world (Saudi Arabia) on one of the poorest countries in the world (Yemen) in order to save this country from the Iranian tide and within three days, according to the image drawn by the tools mopped from the skin of their identity to their masters (the coalition) that entered an open war, enveloped by humanitarian slogans and exposed by scenes of massacres and the victims. And the imposition of the coalition as invaders and occupiers on many Yemeni areas.

The most important question here is what will the activists and free people of the world, including in Chile, do to assimilate the paradoxes between the stated objectives of the military operations in Yemen and between the implicit colonial whims, tendencies and ambitions ?, For between Chile, which is located in the far west of the globe, and Yemen, which is in the far south of the Middle East, is vast distance.  And just as the world heard in the early months and years of the war on Yemen, the Chileans heard the news wrapped in falsity, and only the human rights activist Connie continued to follow with high professionalism and shrewd check for scenes and images of the war transmitted through the wide media, knocking on the doors of communication and human relations, through which Connie reached one of the reports of the team of External communication, which works from Sana’a, is a source for honest people in the world. Its text reports translated into eight languages ​​and accompanied by pictures and documentation of the catastrophic and tragic situations left by the war on earth and man, so the facts began crystal-clear., leading to the shock caused by those images raised in the protests in front of the guards   of The American embassy in the Chilean capital Santiago, then the jurists who joined the march in succession, then general public, who shocked by seeing the pictures that tell the extent of the crimes committed by the American- Saudi coalition against the Yemeni people.

Chilean political and social activist” Connie De Witt” began her first human rights career in the 1970s when her older sister was arrested in Santiago de Chile ,at a time when Chile was witnessing  human rights abuses, and in political circumstances  during the dictatorship of Augusto Pinochet in 1973, “the most fascist and repressive dictatorship on the entire American continent.”

Connie summarizes her experience at the time by saying, “Here I learned what the word human right means!”

After that period, she continued her career as a human rights activist, looking to develop herself with knowledge about the situation of peoples and world wars, through the social media platforms and information industry.

Since 2011, I have heard about the Arab Spring in the Middle East and Yemen, but I wondered more with the announcement of the Saudi-American multi-alliance to start its military operations in Yemen, she added.

“I followed the news of the war in Yemen, it was the hardest human rights experience I’ve ever had, and it took time to find out its facts and its tragic consequences to the Yemeni people,” Connie said.

“If traditional media will provide 50% of the information on the realities of the war in Yemen to readers in Chile, I am sure that this will be a very important humanitarian support, she said, adding,  of course I have only been able to communicate on social networks and send news, visions and readings about the war and its terrible crimes against civilians to the Chilean official newspapers for publication.

She continued: “It was a good coincidence and motive to get to know Yemen more through a friend who came to my Facebook page in March 2015 and told me all about the war in his land and how Yemeni children died in the Saudi bombings.

“This genital Yemeni man was very educated, but his anxiety was very great from what was happening in his Country,,  I felt his pain from his words and his news was very sad because it showed suffering of the Yemeni people, so I started sharing his news about the state of war in his country, she noted .

“Since 2015, I have created various social media platforms through which the Yemeni oppressed people and exposed the crimes of the US-Saudi aggression coalition against Yemen.”

I had circulated these facts to international human rights networks, I and some freedom defenders here in Chile have held several marches and protests in front of the US Embassy in Santiago, denouncing the war and demanding an immediate halt, she said.

“On World Children’s Day in the streets of Santiago de Chile, we condemned the “problems of The Children of Yemen” in the war and severe malnutrition they are suffering due to the blockade imposed on the country by its neighbor Saudi Arabia,” she confirmed

She said that she will continue protests among the wide spectrum of activists and free men in Santiago de Chile until the war on Yemen is stopped and the blockade lifted.”

All greetings to Yemen and the leader of its revolution Sayyed Abdul Malik al-Houthi and the head of the political council Mahdi Al-Mashat, she said

She praised the role of the Yemeni external communication team in Sana’a, which has been providing us with honest reports and images of the reality in Yemen and the crimes of aggression in the country, which was able to break down barriers and open channels of communication with us and provide us with the necessary images and reports.

Greetings and love to the heroic Yemeni people and soon hopefully visit you in Sana’a to celebrate together victory over the American-Saudi aggression, she concluded.

If Joe Biden Keeps His Word, He Could End The Saudi War on Yemen