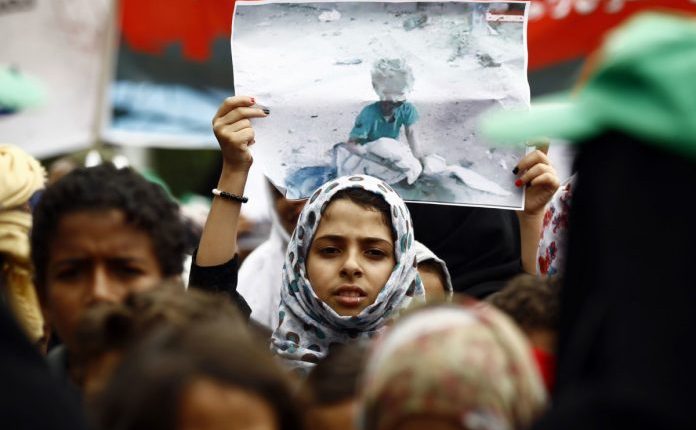 A Yemeni Girl Murdered With an American Bomb

By: DANIEL LARISON Screaming for her daughter, Amira saw Raja’s twisted body under a small tree. Her jaw and entire right side had been ripped apart and blood had already dyed the sand around her black. A neighbour, Hamoud Mohammed al-Ghar, dodged the remaining submunitions to pick Raja up and then ran with her to the nearest road to find a car to take her to hospital. “I knew the girl was already dead,” he said. “But I had to try.” The drones circled ahead the entire time. Raja died on 23 March 2018. But the story of the bomb that is believed to have killed her stretches back decades earlier. Using the serial number and other technical information on the CBU-52 B/B’s outer shell, the Guardian traced the munition from its manufacture in Milan, Tennessee, to Sahar farms, in north Yemen, where it ended a child’s life. The Saudi coalition killed this girl with an inherently indiscriminate weapon that it dropped on a farm. That is part of the coalition’s practice of targeting Yemen’s food production and distribution and more proof of its blatant disregard for the lives of civilians. This is just one horrific example of how U.S.-made weapons have been and continue to be used in Yemen. The U.S. has sold the Saudis cluster bombs that no one should use, and the Saudis have used them to attack civilians. We know from many other attacks that the Saudi coalition strikes civilian targets regularly no matter what kind of bomb they are using, but the use of cluster bombs poses a threat to civilians both now and in the future. Cluster munitions are especially dangerous to civilians, because some of the individual bombs that they disperse don’t immediately explode and continue to be lethal for decades to come. The article continues: “Cluster munitions went through a proportionality test to measure military advantages gained versus civilian harm of their use,” said Rawan Shaif, the lead Yemen researcher at the open source investigative organisation Bellingcat, of the Geneva conventions relating to the protection of victims of armed conflict. “There’s no military advantage in using a cluster munition in a farm, unless your aim is to make that area uninhabitable for generations of civilians and military alike.” [bold mine-DL] The cluster bomb that killed Raja was manufactured at the Milan Army Ammunition Plant in 1977. The large site, just north of Jackson in west Tennessee, encompasses 231 miles (372km) of roads and 88 miles (142km) of railways and is nicknamed Bullet Town by residents. The farm where Raja was killed is located in Saada in northern Yemen. This is the province that the Saudi coalition illegally declared the entire area to be a military target in 2015. Ever since then, schools, houses, farms, and markets have come under frequent attack from Saudi jets. Saada is one of the most heavily bombed parts of the country. Among the coalition’s many innocent victims in Saada were the dozens of schoolboys massacred on their bus in Dahyan in August 2018. This is the war that the Trump administration defends so vehemently. The Saudi coalition also appear to be using more cluster bombs in the war than they have before: Despite condemnation from human rights groups over airstrikes in Yemen, Yemac’s records suggest more cluster bombs are being dropped on Saada than ever: at least 147 cluster munitions were recovered in the province in the first six months of 2019, up on 122 in the same period of 2018. The Saudi coalition’s reckless disregard for innocent life in Yemen appears to be getting even worse the longer that the war goes on. Unless the U.S. cuts off all support for the war and pressures the Saudis and the UAE to halt their campaign, there will be more innocent victims like Raja killed with U.S.-made weapons. McKernan closes her report with a quote from Raja’s father: US-made bombs rain down on north Yemen with almost total impunity. At Sahar farms, the drones have been back in the last two months. “They already killed my daughter,” said Hamid. “Now they’re back for more.”

Warnings of Humanitarian Disaster due to Continued Blockade of Oil Derivatives