Alex Maleas, the company’s general manager asked the company’s employees to return to their homes, while announcing the suspension of all company activities and businesses in the  9 oil sector  in al-Khasha’a area. 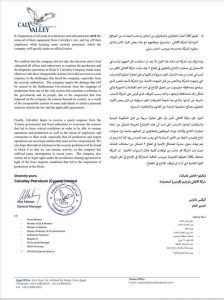 He attributed the suspension of production due to extortion since the return of production in 2019, in addition to the development of armed points in front of the company gate, banditry and detention of oil tankers.

The production of oil has been suspended since January 11, considering that the exploitation of the security situation harmed the company and its employees.

He stressed that the company will no longer be able to resume production, exploration and development operations in Sector 9 securely, and will not accept work under any circumstances of blackmailing or under demands that are  irrelevant  to the joint agreements in production.

The company’s general manager reiterated his demand for all subcontractors to withdraw their equipment from  the company’s field positions while some security personnel remained.

He pointed out that the company has exhausted all efforts to continue the production and development processes in the sector to reduce irresponsible work, especially by the security authorities.