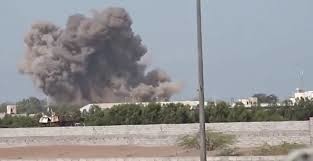 The aggression warplanes targeted, with 2 raids, the Al-Amsheya area in the Harf Sufyan district, said the official.

He indicated the aggression’s raids caused serious damage to the civilians’ properties.

The official denounced the continuation of the aggression’s warplanes targeting populated areas and destroying public and private properties, in light of shameful international silence.