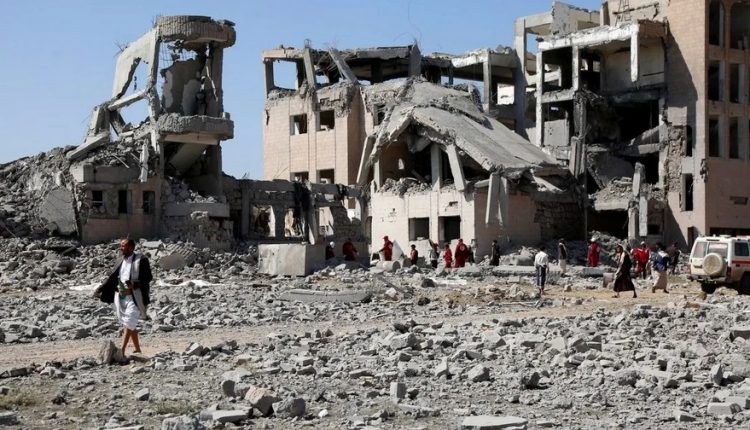 Shocking Numbers of Victims in Yemen during Five Years of Aggression

With the completion of the fifth year of the US-Saudi aggression, the Ain al-Insiyah Center “Eye of Humanity Center” for Human Rights and Development issued its periodic report, revealing shocking numbers of civilian victims and civilian facilities destruction in Yemen as a result of the direct targeting by the coalition of aggression.

On March 26, 2015, the former Saudi Foreign Minister, Adel Al-Jubeir, from the courtyard of the White House in Washington, announced the formation of a military alliance between several countries and the launch of a military operation against Yemen codenamed “Decisive Storm.” Yemen then experienced a humanitarian tragedy that the United Nations classifies as the world’s worst.

In 1800 days of war on Yemen, the coalition of aggression launched more than 250,000 airstrikes, threw thousands of cluster bombs and carried out hundreds of thousands of sea and land bombing operations, causing the death of tens of thousands of civilians. The US-Saudi aggression has targeted residential neighborhoods, markets, roads, mosques, villages and cities. It almost completely destroyed the infrastructure in Yemen.

Regarding the civilian victims, the Ain al-Insiyah Center, an independent civil society organization, reported 42,582 civilian casualties due to the direct shelling of the coalition, especially the airstrikes. This large number includes 16,618 civilian martyrs, including 3,725 children, 2,357 women and 25,964 injured and handicapped civilians, including 3,941 children and 2,721 women.

Regarding infrastructure, the report confirms that 8,610 civilian facilities were targeted by the coalition of aggression, varying between 15 airports, 16 ports, 1990 reservoirs and water networks, 297 electricity stations and generators, 3,819 roads and bridges, 520 communication networks and stations and 1953 government facilities.

Despite the enormity of the numbers reported by the Ain al-Insiyah Center, they are deficient, as the situation is more horrible. The head of the Ain al-Insiyah Center for Rights and Development, Ahmed Abu Hamra, told Almasirah Net that the organization was unable to reach the regions and governorates occupied by the aggression, indicating that the aggression committed in the border areas crimes and intensive and continuous bombing. The organization has not been able to get there.

“In fact, the statistics are more than what has been documented,” Hamra added.

Moreover, the center’s statistic included only direct losses due to the aggression’s direct bombing, while hundreds of thousands of Yemenis died as a result of the economic blockade, the closure of Yemeni ports and airports, the lack of medicines, the spread of epidemics, malnutrition and kidney failure diseases according to official statistics. UN reports show that there are more than 14 million Yemenis in urgent need of humanitarian assistance and 7 million and half are in need of food, including 4 million and half in the stage of severe starvation.

Officials at the United Nations organizations say in previous statements, the Yemeni tragedy as a result of the aggression and the blockade has not yet unfolded all its hideous face and that the end of the war means the beginning of discovering the reality of the world’s greatest human tragedy in history. Yemen will need many years to recover from what happened to it as a direct and indirect result of tons of weapons thrown over 5 years, the blockade and the spread of epidemics.