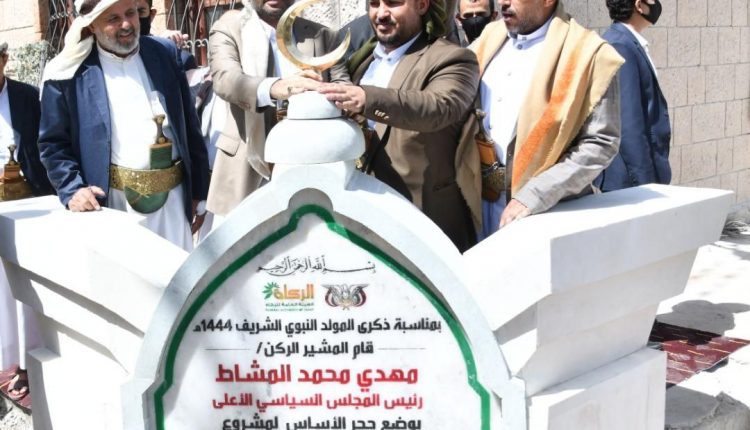 President of the Supreme Political Council, Mahdi Al-Mashat, on Sunday confirmed the continuation of follow-up and support to the General Authority for Zakat in order to achieve all legitimate purposes and noble goals on the widest scale.

This came during his laying the foundation stone for the “Al-Nabi Al-Akram” Specialized Hospital for Kidney Diseases in the capital, Sanaa, which aims to provide health and medical services to the poor and needy who suffer from kidney diseases, renal failure and urinary tract.

President Al-Mashat expressed his thanks for the efforts of everyone who contributed to the preparation of this project, which is considered the best in terms of the idea and the humanitarian service that it will provide to the poor and needy, and in terms of its coincidence with the great religious occasion, which is the anniversary of the Prophet’s birthday (peace be upon him).

He explained that the occasion’s title is a comprehensive one that does not rise to its level except for projects that contribute to saving people’s lives, in accordance with the Almighty’s saying, {“And whoever saves a single life, it is as if he saved the lives of all people.”}

“When we note the legitimate purposes of Zakat funds directed for saving people’s lives, this is the pride of our blessed revolution,” he said.

President Al-Mashat listened to a brief explanation from the Head of the General Authority for Zakat on the projects that would be launched on the anniversary of the Prophet’s birthday, and directed their launch in conjunction with this great occasion.