This is what coalition weapons made..’Mohammed, Nasser, Amna, and Abeer,’ brothers with falling-skin faces

On the brink of death, their sore faces spoke and their fallen skins screamed in a humane language that the aggressors against the children of Yemen may not understand even if they tried to humanize their rock masks and refine their desert hearts.

Six years have passed, but each day of those years, for the four siblings Mohammed, Nasser, Amna, and Abeer, and their parents, was heavier than the airstrike that carcinomas their bodies and made them taste the bitterness of slow death.

On that fateful morning at the “Abu Bakr Al-Siddiq” School, located in Al-Hashwa district of Saada province, northern Yemen, the four brothers were playing in the schoolyard, with a wide smile on their innocent childish features, and the sunlight shines on their sparkling white skin, reflecting a rural childhood with its unparalleled simplicity.

At that moment, while they were babbling their Saadian tone with gluttony and love of life, the Saudi-led coalition warplanes came to rob them of their childhood with an airstrike that scattered them everywhere.

“Mohammed, Nasser, Amna, and Abeer,” the children of Hajj “Matar Ali Zimmam,” were diagnosed with cancer as a result of exposure to chemicals and radiation from missiles dropped by the coalition aircraft on their school in AlHashwa district.

Matar said in a statement to Al-Masirah TV Channel: “My children have skin cancer due to the coalition airstrike that targeted a school near my home. I take them to Sanaa (the capital city) every three months, and every time I spend between 800,000 riyals to a million riyals for surgeries to clean their wounds.”

In a heart-breaking video clip, Matar called on humanitarian organizations and all the free people of the world to pay attention to his loved children and to save them.

It is one of the hundreds of crimes and massacres against the children of Yemen, which are overlooked and ignored by all international organizations that only contented with declaring that no less than 400,000 Yemeni children under the age of five may starve to death this year due to severe malnutrition. 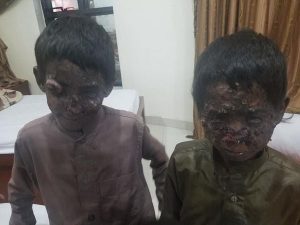