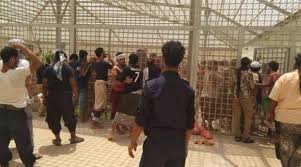 Rights activists in Taiz province, southwest Yemen, condemned on Wednesday the continued detention of an activist from Taiz and a group of his colleagues by the UAE-backed Southern Transitional Council (STC) for more than a month, out of legal justification.

Activists on the social media websites called on the STC to quickly release the activist “Shathly” and his colleagues. They also called on all civil society organizations to exert pressure to free the detainees.

It is worth noting that many of the people of Taiz were arrested and held in the STC’s prisons while they were traveling across the southern provinces for regional and racist reasons only.