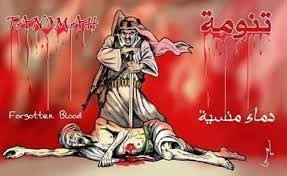 The Massacre Of Yemeni Haggis In Tanomah.. A Crime Against Humanity

The Kingdom of Al Saud has a long history of brutal hostility towards the Yemeni people from its founding to the present day, a continuing historical animosity, and an unbroken decades-long conspiracy against Yemen, land, and human being.

The Saudi regime did not respect the right of neighborliness but trampled on the realities of history and geography against a country that extended its arms to communicate and establish relations of neighbors and brothers, but those who lived and were raised on crime, blood, and murder could not change their behavior and edition overnight.

Since the establishment of his state in the 1930s, the Al Saud has focused all its interests on Yemen, sowing discord, division and spreading chaos and crime, their history in this long and multifaceted path has been the enemy of Yemen in all its historical stages and the succession of its systems.

At all stages of Yemeni history and the kingdom of evil standing in the face of this country, the plots against it are hatched and spreading crime, terror, corruption, discord among its children, looking for weaknesses to gain access to the Yemeni depth.

The Kingdom of Al Saud sire taught the lessons of the occupiers of The English and The Americans, which they set up by a state through conspiracy, murder, and blood, to carry out its agenda in Yemen and commit horrific massacres throughout the history of the relationship between the two countries and the two neighboring peoples.

We are now living at the beginning of the third millennium, and the Saudi regime still carries the same misguided and conspiratorial ideology against the Yemeni people, and these six-year wars are visible and a crime is being experienced by contemporary Yemeni generations.

Returning to history, we look forward to a heinous crime committed by the Al Saud gangs against Yemeni pilgrims in Tanomah and Sedwan regions, which claimed the lives of 3,500 pilgrims, followed by the liquidation of the wounded and survivors in brutality that was killed by the mortal Abdulaziz Al Saud, whose state was based on a series of massacres, murders and horrific atrocities to perpetuate his rule by force and blood.

Today, the people of Yemen stand silently in respect and recognition of the martyrs of the massacre of Yemeni pilgrims and restore the historical hostility of the Saudi regime against their country and the reality of Saudi ambitions and its malicious aims towards their people.

Yemen’s Scholars: After 100 Years Since The Massacre Of Tanumah, The Saudi Regime Still Pours Its Anger And Hatred Against The Yemeni People