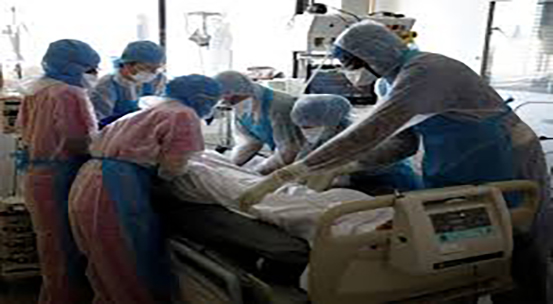 The United States has recorded another 941 coronavirus-related fatalities in the last 24 hours, bringing the country’s death toll so far to 113,774, according to a tally by Johns Hopkins University.

The world’s top economy is the most affected by the pandemic in absolute terms, with both the highest number of deaths and the largest number of infections — 2,021,990 at 8:30 pm on Thursday (0030 GMT Friday), a tracker maintained by the Baltimore-based university showed.

The US continues to register around 20,000 new cases of coronavirus each day, and is struggling to come down from that plateau as infection rates wax and wane around the country.

In some more sparsely populated rural regions, the number of hospitalizations is climbing compared to a month ago.

US Treasury Secretary Steven Mnuchin said on Thursday there will be no more shutdowns, even as the outbreak flares in some states.

Cases are rising in nearly half the states, according to an Associated Press analysis, a worrying trend that could intensify as people return to work and venture out during the summer.

In Arizona, hospitals have been told to prepare for the worst. Texas has more hospitalized COVID-19 patients than at any time before. And the governor of North Carolina said recent jumps caused him to rethink plans to reopen schools or businesses.

There is no single reason for the surges. In some cases, more testing has revealed more cases. In others, local outbreaks are big enough to push statewide tallies higher. But experts think at least some are due to lifting stay-at-home orders, school and business closures, and other restrictions put in place during the spring to stem the virus’s spread.

“It is a disaster that spreads,” said Dr. Jay Butler, who oversees coronavirus response work at the US Centers for Disease Control and Prevention. “It’s not like there’s an entire continental seismic shift and everyone feels the shaking all at once.”