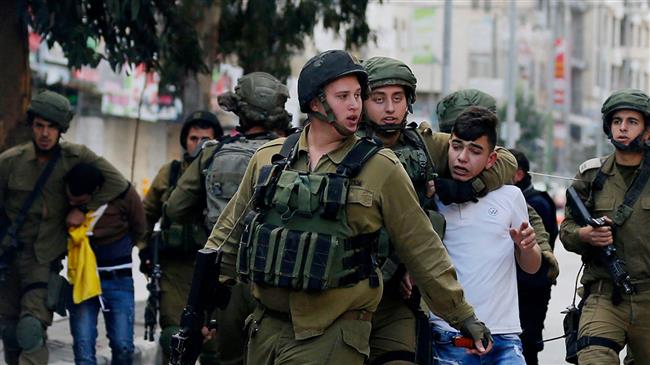 The commission announced the news in a statement on the eve of the Palestinian Child’s Day on April 5, saying that these minors, who are from the occupied West Bank and eastern sector of Jerusalem al-Quds, are kept in three Israeli prisons, namely Damon, Megiddo and Ofer.

The three prisons lack the basic requirements for human life, said Qadri Abu Baker, the head of the commission, warning that these desperate children prisoners “are subjected to torture and degrading treatment which contradict the international principles of human rights.”

He lambasted the United Nations for failing to “provide the minimum protection for the Palestinian children” against the physical and psychological abuse in Israeli jails.

Abu Baker noted that Israeli forces have arrested more than 17,000 minors since 2000, adding that in most cases the children under the age of 10 were detained. He stressed that the majority of these children subjected to physical and psychological torture.

The head of the rights commission called on the UN chief, the Human Rights Council and international organizations, particularly the UNICEF and Amnesty International, to take serious action to pressure the Israeli regime to release all detainees, especially children, whose lives are under threat due to the coronavirus pandemic.

Every year, between 500 and 700 Palestinian children at the age of 12-17 are arrested and tried in Israeli military courts, the Defense for Children International says.

Israel refuses to free children amid pandemic despite Intl. calls

On Sunday, the Palestinians Prisoners’ Club said in a statement that the Israeli regime refuses to release jailed Palestinian children despite repeated calls from the international community and rights groups as the COVID-19 pandemic rages across the globe, including the occupied Palestinian territories.

It warned that the Israeli prison authorities have put two jailed Palestinian children, suspected of being infected by the contagious disease, in quarantine, instead of releasing them.

The club called on the relevant international bodies, including the UNICEF, to intervene immediately to free the detained Palestinian children.

According to a report by the Arabic-language SAFA news agency, Israeli authorities commit grave violations against the rights of child prisoners from the moment of their arrest and detention.

It said that Israeli forces often raid Palestinian homes late at night to arrest the suspected children and keep them without food or drink for long hours, an in some documented cases for two consecutive days.

The report also said that the Israeli authorities force Palestinian children to sign statements in Hebrew without translating them into Arabic for them. They also deny the children their legal right of the presence of a parent and lawyer beside them during the interrogation.

The detention of Palestinian children by the Israeli regime flagrantly violates Article 33 and Article 34 of the UN Convention on the Rights of the Child, according to which the states parties must protect children from abduction and all forms of exploitation.

The Israeli regime has a long history in wounding and killing Palestinian children, especially during anti-occupation protest rallies.

Back in March last year, the UN children’s agency, UNICEF, said that around 40 Palestinian children had been killed and hundreds more wounded in a year of anti-occupation protest rallies along the fence that separates the besieged Gaza Strip and the Israeli-occupied Palestinian territories.

Refugees in Malaysia stay at home for fear of Coronavirus