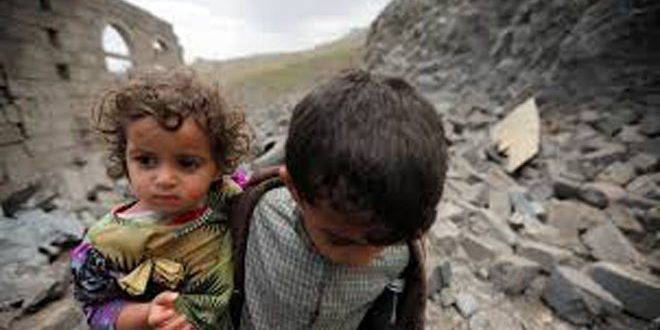 In Marib, 1,200 families Live Humanitarian Catastrophe Due to of Coalition War and Siege

Majzar District, Marib Governorate, with a population of more than 12,000, and between Ma’rib and Al-Jawf governorates, has witnessed a human tragedy due to the repercussions of the war and the siege that the coalition is launching. The aerial US-Saudi aggression targeted the service establishments and projects in the directorate, which exacerbated the suffering of the people, as a result of the suspension of service projects.

A field survey by the branch of the Supreme Council for Administration and Coordination of Humanitarian Affairs in the governorate recorded hundreds of moderate and severe malnutrition cases in the directorate, which is a warning bell for organizations to prevent the occurrence of a humanitarian catastrophe, children are their first victims.

Health facilities stop providing primary medical services to patients, places the parents between the fire of death slowly or travel to remote areas to receive treatment with the consequent high costs. The citizens of the district are in urgent need to activate health facilities in the villages and villages and provide them with equipment, medicines and medical supplies to carry out their role in reducing patient suffering.

The main water project was halted after being targeted by a series of raids by the US-Saudi aggression, prompting the people to drink polluted water, which led to the emergence of many diseases and acute watery diarrhea.

According to the field survey, more than 1,200 families need urgent food aid to alleviate their suffering, as many families returned to their homes after the liberation of the district. It stressed the importance of the move to normalize the situation and facilitate the return of the remaining displaced families and provide them with livelihoods.

Perhaps what most people face in the district of Majzar is the absence of sources of income and the cessation of agricultural activity, which requires action to support farmers and encourage them to replant their lands for the benefit of them.

Dozens of families whose homes were destroyed by the aerial targeting are in urgent need of shelter assistance so that they can rebuild their destroyed homes or help them build new homes. Also, the educational process in the directorate needs support from either schools or educational cadres to enable students to continue their education that they were deprived of as a result of the aggression, and to set up a program to return students to schools.

In this regard, the director of the branch of the Supreme Council for the Coordination of Humanitarian Affairs in Marib Abdul-Khaliq Al-Sharif called on relief organizations to assist the affected and displaced families in Majzar district due to the aggression of the coalition.

He pointed out that Majzar district has witnessed difficult humanitarian conditions in light of the failure of international humanitarian organizations to play their humanitarian role in alleviating the suffering of citizens.

Al-Sharif pointed out that the situation will get worse if the organizations do not play their part in the suffering of thousands of children, women and the elderly.

For his part, the director of Majzar Salih Ali Al-Sharif district appealed to the international organizations and the concerned authorities to assist the local authority in restarting service projects and health centers to play its role in alleviating the suffering of citizens and normalizing the general conditions after liberating the Directorate from the coalition forces and its mercenaries.

This is what coalition weapons made..’Mohammed, Nasser, Amna, and Abeer,’ brothers…

Abdulsalam: the corridors are opened to those who want to provide humanitarian…